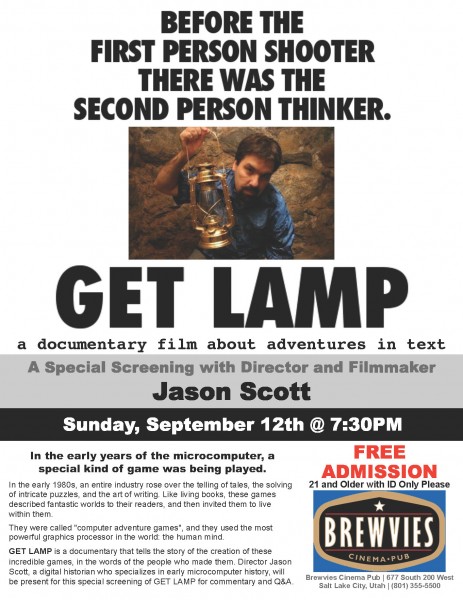 The screening will take place at Brewvies Cinema Pub, a cool place in downtown SLC that serves beer and food with movies, so it should make for a great place to see the film on the big screen. Jason will be there for commentary and Q&A after the film. Since SLC has a fairly strong IT community, I hope to see a good crowd that will be able to relate with much of his background. The Brewvies theater can hold up to about 170 people, so if we can get the word out in time, we could get a good group together. Plus, if we can get more than 100 people, Brewvies will cut the cost of the facility rental in half!

The event will be on Sunday, September 12th at 7:30PM, is open to the public, and admission is FREE. Keep in mind, however, that since Brewvies serves alcohol, admission is open only to those 21 and older, unfortunately.

A link to an entry for the event on Facebook is here, for those of you interested. If you’re in SLC, please come to the screening! Full report to follow.

This entry was posted in adventure games, indie games, interactive fiction, text in games. Bookmark the permalink. Post a comment or leave a trackback: Trackback URL.