Since Vespers has mostly been a one-man operation, I haven’t spent too much time on formal game design documents. Some detailed information can be helpful for collaborators, particularly on the art side with N.R., but I’ve mostly dealt with those issues as they’ve arisen. But one area that I’ve found helpful for myself has been mapping out the locations and activity in the game, so I can keep track of what happens in a particular Act and where it happens.

Since I’m using the text version of Vespers as the basis for the game, I’ve had to play through the text game and read through the source code countless times, making sure to account for all different kinds of approaches to game play. Jason wrote the original game in such a way that most activity occurs in distinct locations around the map; rarely does an event occur that spans multiple locations, and rarely does an NPC move from one location to another during an Act. That made it relatively simple to lay things out for each Act on a map of the game, which I can refer to at times to make sure I’m accounting for everything.

I started out by mapping the entire text game onto a location map, with each box representing a location in the game, and lines representing the pathways between locations according to compass direction. 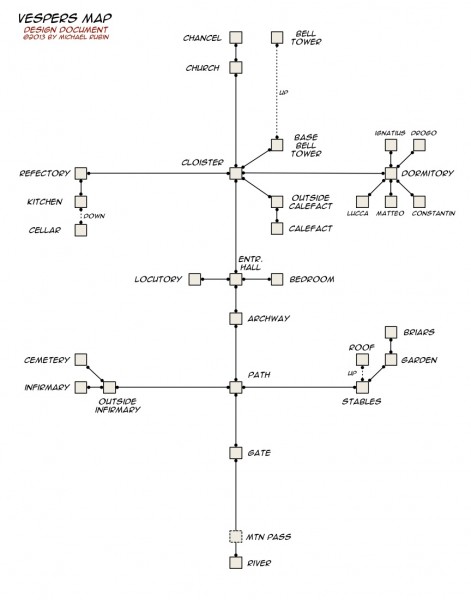 The first day of the game comprises Acts I and II, although the text game doesn’t split things up into separate Acts—that’s something of my own creation. During Day One, the action is restricted to only about half of the game map, as the player is not allowed to leave the monastery due to the weather. The rest of the activity was mapped out on this template. So, for Act I, the design doc looked as such—and note, there are, of course, spoilers here: 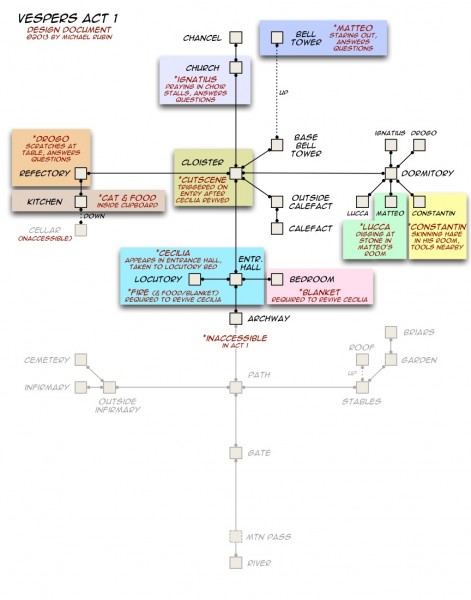 For those familiar with the text game, the only departure here is that the “cutscene”—that is, the scene where the first dead body is discovered—occurs in the Cloister per se, rather than in the location specified as “Base of the Belltower” to the northeast of the Cloister. This was mostly for 3D reasons; the way the monastery (and the Cloister in particular) was created in 3D didn’t really allow for a distinct space for the base of the belltower that is not covered by the Cloister colonnade (which, for spoilerly reasons, would not accomodate the dead guy very well.)

(Actually, that’s not entirely true: in the 3D game, I’ve actually reversed the locations of the infirmary and stables, such that the infirmary is on the east side of the monastery and the stables are on the west side. I can’t remember now why I did that, but I don’t think it impacts anything.)

As for Act II, that begins right after the first cutscene ends, with the player standing in the Cloister. Interestingly, Act II has less action than Act I, and can even be totally bypassed by the player if desired. The Act ends when the player goes to sleep for the night, which of course triggers a new scene and/or cutscene, before proceeding to Day Two (and Act III). Again, spoiler warning. 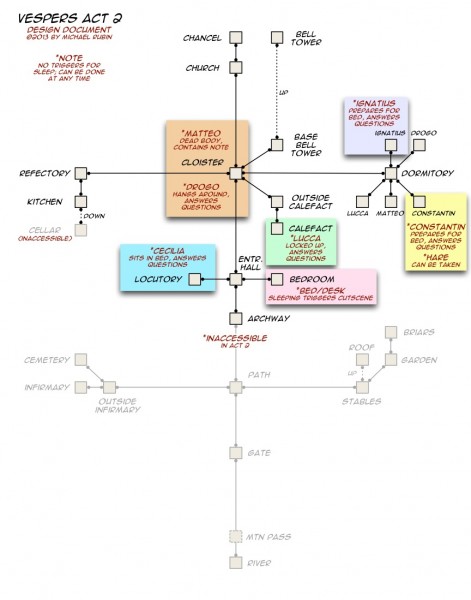 Arguably, these are not true game design documents per se, since these really only provide a glimpse at the basic map of the game and the briefest of descriptions of the action in the game, without going into all of the other aspects of game design and play that these documents usually describe (art style and concepts, sound and music description, user interface details, and so on). It’s probably better to describe these as “level design” documents, so to speak. Perhaps one day I’ll put all of the rest of the details together into a true GDD, since I actually have most of them already put together in one form or another.