Well, yet another month is in the books. Weird August fact that only I find interesting: I know I don’t post a great deal on this blog compared with other blogs, but looking back over the years it seems that August is the month I have posted the least overall. In fact, until this year, I hadn’t posted a single blog entry in August since the first year of the blog, in 2008. I have no idea what this means.

This week was relatively quiet, but still important tasks were accomplished or started. As I mentioned last week, I installed Parallels on my Mac dev machine so I could do my modeling/animation/exporting work side-by-side with my programming and testing work without having to reboot into a different OS every time I needed to switch. While I did get most everything up and running nicely, this past week was spent further finalizing the setup, and getting a few straggler programs re-installed and set up correctly. Everything is now just the way I had it before, and it really works well. I have not been a big Parallels fan before now, since I never thought the product was mature enough to run the way I needed it, and I wasn’t a fan of the way it modified the Windows installation in order to run. Plus, Windows under Parallels would endlessly grind a standard hard drive like nothing else, enough to drive me insane. But now, with the latest Parallels and a beefy SSD drive, it seems to have hit a nice sweet spot. It still doesn’t run intensive stuff blazingly fast, but it’s absolutely workable now.

While that was going on, NR started to work on a new IFL animation for the main candle, so we can animate the candle being blown out. I still have no idea if we can get that working, or what we’ll do about a trail of smoke, but we’ll find out soon. I also used the new Windows-Boot Camp-Parallels setup to bring the Windows version up to 05b, same as the Mac side. Recompiling went smoothly, which was a big relief. Finally, I went through all of Constantin’s Act 1 interactions and played with the audio files to ensure the voice was in sync with the animations. With that done, I can turn once again to Drogo’s Act 1 animations to make some needed tweaks.

I’ve been working on Constantin a bit lately, so this week’s screenshot shows him during Act 1, in his dormitory room. He’s telling me his feelings about the monastery. 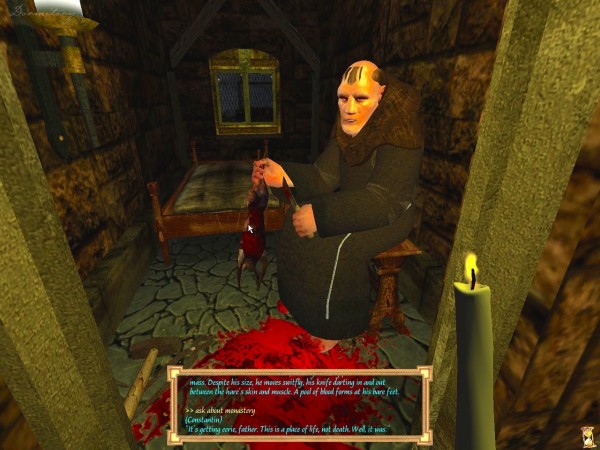 Constantin takes a moment from skinning the hare he caught to speak with me.