It’s been a while since the last changelog; about five weeks or so, as it appears. My goal has been to keep this as a weekly update, but sometimes life doesn’t play along. Just like this past May, we’ve again been dealing with the loss of another cherished family member, so work slowed down considerably. It has been a tough 12 months in that regard, with the loss of too many of our close family. In addition to that, NR has taken on a new day job, so work on his side has also taken a hit. It was not a very good September.

But now, it’s October, and it’s time to get back into the swing of things. It hasn’t been completely silent here, to be honest. In the past few weeks, we’ve done a little bit of modeling work, a little bit of verb coding, and a little bit of animation adjustment, in addition to some hardware modifications. With respect to the latter, I recently upgraded our home internet to a faster speed, but in doing so, I had to drop my longtime ISP; as a result, using my Mac mini as an SFTP server was no longer a real option. This is not a huge deal, as I’d been looking to make a change in that regard for a while. So instead, I moved all of our work files to an online file sharing service, which works well enough for us since there’s only two of us sharing, and it provides an extra level of file backup.

The modeling work has been on the main fatherCandle, as we try to create a second IFL animation for the “blowing out” sequence. Turns out this is quite the challenge, as it’s not entirely clear if Torque DTS shapes can have more than one IFL animation sequence. In order to figure this out, we’ve had to create a new candle object in Maya instead of the old version in Max, and it’s been a slow learning process for us. The animation adjustment is the work on Drogo’s Act I animations, which need some fine tuning; this is work that I am doing here and there, but there’s plenty more left to do.

Finally, I’ve made some progress with a new verb, in this case USE. The USE verb is not implemented in Jason’s Vespers, and I tend to agree that USE is too vague and too much of an easy catch-all for players, so I’ve avoided it until now. But with the need for better parser functionality, I felt it was important to at least recognize USE, and to redirect the player when appropriate. I’m also toying with just forcing USE to trigger the appropriate action for objects with only one obvious or common use; for instance, USE DOOR would automatically trigger OPEN or CLOSE depending on the door’s state. Although on principle I don’t like this allowance for a catch-all verb like USE, it may be a reasonable solution given the need for more accepting parsers.

I will be on the road for much of this week for work, so probably not a lot new to report next Monday. If not, then I’ll postpone the next changelog to the following week.

Since I’ve been working on Drogo’s Act I animations, here is a screenshot of one of them. Here, Drogo gives me his honest opinion about Ignatius. 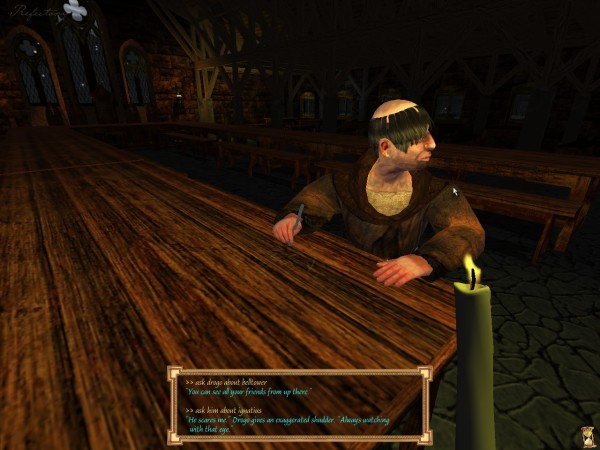