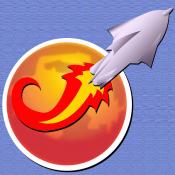 And, there we go. Another IFComp come and gone, with the winners announced this past week. It sounds like the 15th Annual was on par with most, although there appeared to be significantly fewer games overall than in the past (24, compared with 35 last year, 43 in 2006, and 36 in 2005). An ominous sign? Not the way I see it. As others have pointed out elsewhere, this year could be considered an excellent year for IF — in particular, non-comp pieces. We saw quality, ambitious works such as Aaron Reed’s “Blue Lacuna” and Jimmy Maher’s “The King of Shreds and Patches”, not to mention Textfyre’s release of their first two commercial pieces, “Jack Toresal and the Secret Letter”, and the acclaimed “The Shadow in the Cathedral”. So there was certainly no shortage of good IF this year.

This year’s Comp had one relatively clear-cut winner, “Rover’s Day Out“. Many good things were said about this game by reviewers, to wit:

Spunky and inventive, with lots of polish and enough freedom in the late game that the hard things aren’t too hard. I particularly liked the characters, and the way the game managed to make its complicated premise seem reasonable and comprehensible. –Emily Short

What’s also interesting is that, in looking over other people’s reviews of the game, there were many that were not especially glowing. I haven’t delved into the Comp this year, and Rover in particular, to know exactly how it outperformed the rest of the field by such a nice margin. But regardless, my impression is that it’s a worthy winner that I’ll eventually check out.

IFComp time is a fun time of the year for me, but it really passed by in 2009 with barely a ripple on the Brew, and I’m left feeling a wee melancholy. I’m not sure exactly why that was, although I suspect much of it had to do with the IF talk I gave at the Austin GDC. So much research and preparation went into that talk that it was almost like I gorged myself, so perhaps I just needed a bit of a break from IF. Another consideration is that I finally got around to actually playing some other games this fall, including the much-anticipated Machinarium, so my attention has been pulled in different directions.

So I’m a bit sad that I didn’t partake in the festivities this year, but if 2010 is anything like 2009, there should be plenty of new IF goodness to feed on before long. And, hopefully, that will include Jason Scott’s GET LAMP, now that he can spend some quality (funded) time on it.

This entry was posted in adventure games, interactive fiction. Bookmark the permalink. Post a comment or leave a trackback: Trackback URL.