Though I guess it sort of depends on your definition of “soon.” More like, “soonish.”

I put together this poster for the game a while back just for fun. Yes, it distracted from game development for a time and no, it doesn’t serve a grand purpose. Some things just have to be done for their own sake.

In any case, I submitted this in the “supplemental material” for the two game comps, along with some screen shots and other materials. 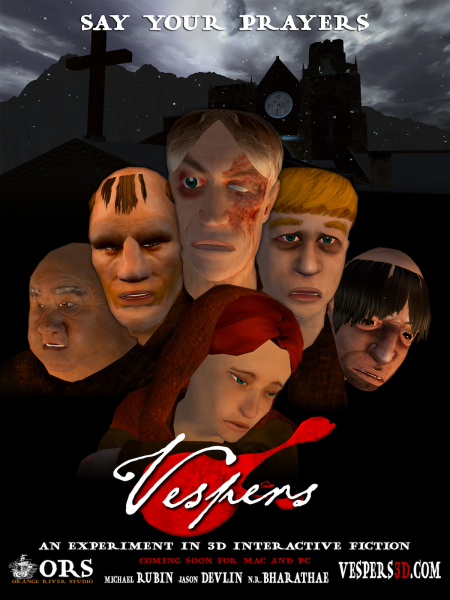 I already had a pretty good head start on this. Almost one year ago to the day, I helped put together a local screening of the documentary “Indie Game: The Movie” here in Salt Lake City, at the same venue (Brewvies Cinema Pub) that I hosted a screening of Jason Scott’s excellent “Get Lamp” documentary. It was a great event, with the cost offset through sponsoring from some local game development groups including NinjaBee, Chair Entertainment, Smart Bomb Interactive, and the Salt Lake [More...] Read the rest

May is Motivation Month

May is shaping up to be one of the better months for Vespers.

I’ve talked for years about eventually reaching a point in development where I could submit the game to an indie game competition such as IndieCade, particularly one that would accept works-in-progress. However, each time, year after year, the deadlines came and went without ever quite getting there.

The goal, as always, has been to finish development up to a truly playable version that would allow people to play through the end of Act I, which ends with a short cutscene acknowledging the first significant dramatic event of the game, which then sets the stage for the remaining four Acts. Getting all of the different components of Act I put together, [More...] Read the rest