I already had a pretty good head start on this. Almost one year ago to the day, I helped put together a local screening of the documentary “Indie Game: The Movie” here in Salt Lake City, at the same venue (Brewvies Cinema Pub) that I hosted a screening of Jason Scott’s excellent “Get Lamp” documentary. It was a great event, with the cost offset through sponsoring from some local game development groups including NinjaBee, Chair Entertainment, Smart Bomb Interactive, and the Salt Lake IGDA chapter. Because the movie, of course, focuses on several small independent game developers, I thought the event would be a good opportunity to highlight some of the work being done by our vibrant local Salt Lake City indie developer community. So before starting the movie, instead of showing upcoming movie trailers, I thought it would be nice to show a series of upcoming local indie game trailers.

(Right about now I’m thinking to myself: Really? This was a year ago. I never blogged about it. Yikes.)

I went around to two of our local indie game developer groups and advertised the movie as well as the opportunity to show a short (roughly 1:00) trailer of a game people were either working on or recently released. In the end, I think we had eleven different devs participate. I took all of the trailers and spliced them together into one movie file, which ended up being almost 12 minutes long. People seemed to enjoy it. At the very least, it got some of us motivated to work on a trailer, which can be seriously fun to do.

The trailer I put together for Vespers was a little over a minute long. I had a great time laying it out, piecing it together, and editing the audio and visuals. I wasn’t very happy with the overall quality of the final video, but it was my first time using video editing software and I still had a lot to learn. Fortunately, I knew another opportunity would eventually come by, and I’d have the chance to expand the trailer and work on better video quality. That time was this past month.

Obviously, only being done with Act I of the game, I didn’t have a ton of in-game video to work with, but there was more than enough for a teaser. Since all of the audio work for the game is done, I had a bit more content to plug in on that side. So with the head start of last year’s trailer as a template, I put together a longer trailer for both competitions, with a bit of in-game video mixed in.

So here, for your viewing pleasure, is the official Vespers trailer for IndieCade and Utah Game Wars, as uploaded to YouTube. It should be viewable in 720p. If you want a larger, better quality version, you can view/download it using this link, although note that the file checks in at a little over 100MB in size. 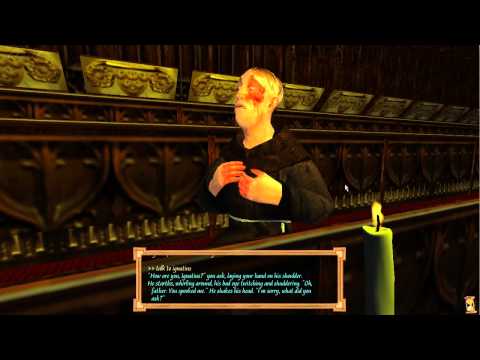 This entry was posted in indie game competitions, Vespers. Bookmark the permalink. Post a comment or leave a trackback: Trackback URL.