For Vespers, I’d say 2009 was a mixed bag. We started out with some nice momentum, on many fronts, and it lasted about half the year. N.R., as usual, was a model of consistency, churning out an impressive amount of material. He completed all of the models and textures for Act I, which was a nice accomplishment, in addition to all of our GUI and logo work. He’s already started chipping away at the additional models needed for Act II and beyond, with much of the work already done. We also got our web site up and running, and although it needs additional content, it’s good to have most of the structure already in place, with the connection to this blog. The forums are also ready to go, for the most part, but I’ll wait on opening those up until we start the alpha testing sometime early in 2010. And as for the animation, we started out great with our trio of interns, managing to get through most of the Act I animation work for the NPCs (and even the cat). We even started planning out the first cutscene, storyboards and all.

Actually, when I think back on 2009 it kind of reminds me of an old board game I used to have as a kid, called “Win, Place, & Show”. It was a game about horse racing, which I suppose just proves that there’s a board game out there about everything. And of course, through the magic of the intertubes, you too can experience one of the memories of my childhood. 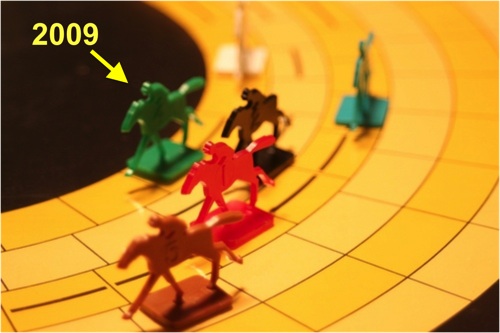 The game involved a combination of skill and luck, and was mostly guided by the power and characteristics of your horse as represented by a set of numbers, one for each turn in the game. Some horses were slow or fast starters, some picked up steam towards the end, and some faded out miserably. But you never knew how many turns were needed to complete the race, since this depended largely on the roll of the dice. So sometimes you were lucky and reached the finish line before your horse petered out, while other times you were unlucky and you never got the chance to kick it in at the end.

Shecky's stats at the '73 Derby, according to Win, Place, & Show

2009 was kind of like Shecky Greene at the 1973 Kentucky Derby. Middle of the pack odds, lots of power up front, but not much on the back end. Certainly no match for Secretariat. I’m sure the WP&S folks produced their numbers by reviewing the race and estimating the values for each turn based on how it went. Seeing that Shecky started out great and led the race for much of the way, I can see where they get these numbers. In the end, though, as reflected in the numbers, Shecky faded down the stretch and finished a distant but respectable 6th. (Lesson learned—Shecky: fine name for a comedian, not so much for a thoroughbred.)

So, as was the case with equine Shecky, momentum was not an easy thing to maintain as the Secretariats and Machinariums blew past us en route to spectacular finishes. Right around July things started slowing down, and it was tough to get things going again. I can think of a good number of things that contributed to this: vacations in July and August, preparation for the Austin GDC talk, the slow dissolution of the animation intern group and, finally, the house project.

Yeah, the house project. The wife and I decided it was finally time to do some significant renovations to our house, and we ended up having to move out while the work is being done. So we’ve been living in a small apartment while the contractors tear the living hell out of our house. That’s had a significant impact on progress, particularly since my server is temporarily down and it’s tough to get much done on my displaced dev machine.

I was also sidetracked for a few weeks while pondering the move from TGE (Torque Game Engine) to TGEA (TGE Advanced), which would provide some improvements and additional options, particularly on the graphics side. In the end, it would require far too much work to port everything over, as it became clear early on that many features broke in the new engine despite it being a close relative.

Nevertheless, we forge ahead into 2010. The animation interns have been replaced with two promising Torque veterans, and we’re already making some progress on the last of the Act I animations. N.R. is just about done with the last of the stained glass windows—no small feat to be sure—and not long after that we should be done with all of the church items, which would be a significant milestone. With just a few more animations and some code contortions, we should have everything set for the demo, and at that point we’ll be ready for some serious alpha testing. Hard to say when exactly that will be, but I’m hoping it will be before Spring. Interested testers, keep me in mind—I’ll be needing you soon!

Hope everyone has a great holiday season and a happy, healthy, successful 2010.

This entry was posted in 3D/if, Vespers. Bookmark the permalink. Post a comment or leave a trackback: Trackback URL.