I don’t play as many games as I’d like to anymore, but I do try to sneak in as many as I can. For the most part, I don’t spend much time with the big ticket AAA games, in part because I don’t have a console, and in part because my desktop is getting a bit long in the tooth (is 7 years too old?). So while I figure out if I’m ever going to rectify that one way or the other, I keep my focus largely on the indie scene. And so, every now and then, I catch wind of a new indie game under development that stirs my interest, and I follow along in anticipation of its eventual release.

Such was the case back in October last year with Amanita Design’s Machinarium, and prior to that about a year ago with Tale of Tales’ The Path. Both have since been released, and both have made a notable impact on the indie game scene—and in my opinion the wait was well worth the experience of the final product.

Another game I’ve been eagerly anticipating, for quite some time now, is Cliff Johnson’s The Fool and His Money.

Johnson first came onto the gaming scene in 1987 with The Fool’s Errand, a low-res black-and-white puzzle game for the Mac (and sundry other platforms) that was like crack for us computer-puzzle-game fans. He followed this up in 1991 with one of my personal favorite games of all time, 3 in Three, another fabulous collection of puzzles that told the story of the number 3 lost in the innards of a malfunctioning computer. Both of these games, as well as his others from that period, are available without charge on his website for downloading and playing, although you’ll need an appropriate emulator to get the job done. The graphics may be dated, but the gameplay is timeless. 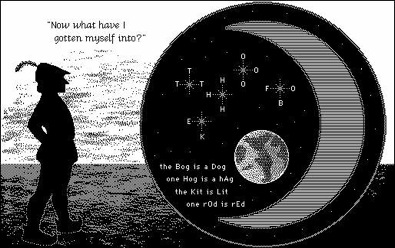 These are games that appeal to the pure puzzle solvers out there. Maybe not so much the puzzles like you find in many adventure games, but rather the kind you’d expect to find in Games magazine. Johnson describes both Fool’s Errand and 3 in Three as “storytelling metapuzzles”, a series of small individual puzzles that fit together within a larger global puzzle, interwoven with a story. There are a wide variety of puzzles ranging from easy to hard, and enough in each game to keep you occupied for a long, long time. As one person described them: “You don’t just have to figure out the answers — you also have to discover the rules.”

Speaking of a long time, after what appears to be an extended hiatus from game development, Johnson decided around 2003 to make a sequel to The Fool’s Errand, which he is calling The Fool and His Money. He stated in an interview back in 2008 that it was the confluence of creating his own website, the evolution of Flash, and the emergence of Paypal that led him to believe he could create, publish, and distribute a new game entirely on his own, and so he embarked on the long journey that has been Fool and His Money.

Unfortunately it has not gone entirely as planned, with the project experiencing a series of obstacles and delays. More than once the shipping of the game was described as imminent, only to see the date get pushed back. That’s too bad—this is sure to be a gem of a game. He has now been working on it for seven years. This is clearly a labor of love, and I admire his persistence. Almost hard to believe someone has been working on a game longer than I have.

Now he believes he’s heading into the final lap, and is announcing the release of the game is set for May of this year. He certainly sounds serious about it. The game has been available for pre-order for some time now, and he’s stated in interviews that this is his main source of funding. While that model may not work so well for an unknown such as me, for Johnson it’s potentially a huge untapped resource. The original Fool’s Errand sold around 250,000 copies, and thanks to piracy probably many more had the opportunity to play the game and become hooked. Add to that all of the sales for his subsequent games At the Carnival and 3 in Three, and you have an impressive group of loyal customers, many of whom (like me) are looking forward to the next installment and are willing to support the effort. He estimates that there are somewhere around 200,000 people closely following his progress on this game, and probably well over 1,000 who have already pre-ordered.

The ultimate plan for Fool is a trilogy, with Fool and His Money followed by a third installment, The Fool’s Paradise. And he also plans on making a trilogy out of 3 in Three, with sequels 3’s the Crowd and 3’s No Charm planned for some time in the future. I assume he’s not planning on seven years for each sequel.

But then again, as I can attest, you never can predict how things will go. But when it’s a labor of love, does it really matter?

This entry was posted in indie games. Bookmark the permalink. Post a comment or leave a trackback: Trackback URL.