End of March Vespers Update (or, How To Drop A Girl)

March is always a busy month, what with GDC and sundry work-related conferences and travels. And this year, of course, there was PAX East. Man, how I wanted to be there for that. It was, by still rare accounts, an amazing show of force by the IF community, and from what I can tell a great time was had by all. It sounds like there was a groundswell of new or renewed interest in IF, which can only be a Good Thing. And, of course, GET LAMP. I can’t help but feel like I missed a significant event in IF and the opportunity to meet some great folks, but at the same time I am excited that it occurred and grateful that there are those who could make something like that happen.

Making things happen is a good theme to maintain, so let’s do that.

The last of the six NPCs we are bringing to life is Cecilia, the girl who suddenly appears at the monastery and…well, you either know what happens next or you don’t, and that’s not about to change now. There’s a reason I had saved her for last, though, and it’s not because she’s the easiest.

The main problem with Cecilia is that she doesn’t conform to the usual NPC implementation pattern. For most NPCs, each Act (mostly) consists of a simple set of idle animations and an extended set of conversation animations. The character typically stays in one location (Matteo in the tower, Constantin in his room, etc.), doing his own thing, and responding to the occasional player question. Pretty straightforward.

Cecilia, of course, makes things far more difficult and challenging. (I could mention at this point that this is partly why we made her a redhead, but I know far better than to do that.)

The main reason is that there is a portion of Act I where Cecilia acts like an object rather than an NPC per se. Without giving too much away, the idea is that, after she collapses at the front door, the player is supposed to pick her up and carry her to the locutory to be placed on the bed there. That means I have to implement her in two additional forms that are different than the usual NPC: as an inventory object (so she shows up in the visual inventory while being carried), and as an object that Torque calls a “ShapeBaseImage” – an object that mounts to the player and is displayed as part of the HUD in first-person mode, the same way a gun would appear in the camera view in an FPS game. 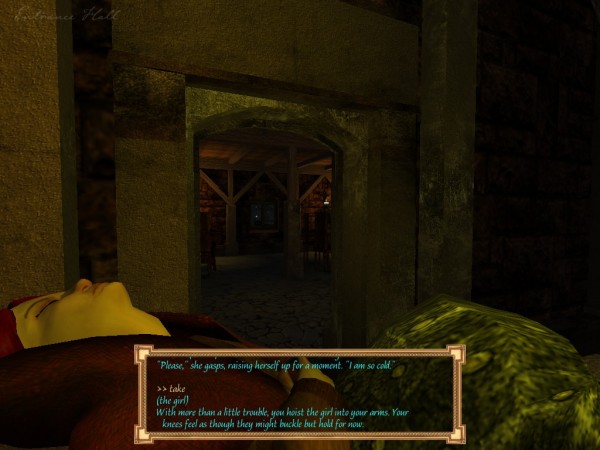 Cool, but what happens when you hit the "fire" button?

Neither of these is particularly challenging, though; just time consuming, and the implementation requires special code coordination to make sure it handles each of those correctly.

The real challenge occurs when you consider that, while being carried, she should be handled just like any other inventory object. Which means she should be able to be dropped at any time. 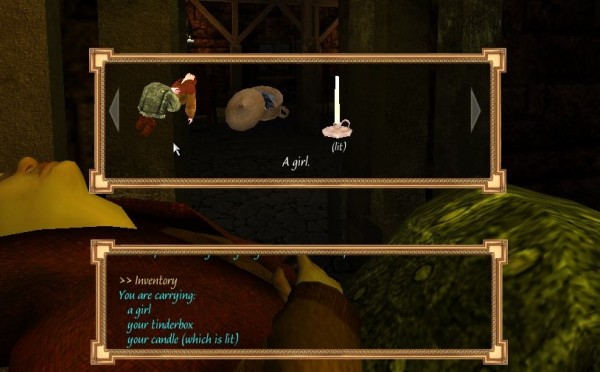 A closeup of Cecilia as "inventory object". It's dehumanizing, I know.

Another part of the equation is that NPC objects have collision boxes, just like the Player’s object has. So when you drop the girl, her collision box immediately interacts with the player’s collision box, causing all kinds of havoc. That requires all sorts of workarounds to make sure the collision boxes don’t interact, but that, in turn, tends to complicate other matters.

On top of that, rather than just teleporting her static body immediately to the ground near the player (or the bed), I’d like to give the whole process a bit of life by including an animation that shows her hitting the surface and coming to rest in her idle position. That means timing the whole process of dropping, starting the animation, and hitting the floor.

So in the end, we’ve taken the relatively simple process in IF of dropping an inventory item and proceeded to make it horrendously complicated. Go team!

More on Cecilia to come.

This entry was posted in 3D/if, interactive fiction, Vespers. Bookmark the permalink. Post a comment or leave a trackback: Trackback URL.