Every once in a while you come across something that reminds you how awesome the intertubes can be. Zazzle is one of those things.

Sure, more people probably know about Cafepress, and this sort of thing has been around for a while already. Making a custom T-shirt or mug with your own artwork is no revelation, for sure. But over the years it has developed into a pretty slick process, and it’s pretty cool how easy and fast it is to whip up a prototype of something, order it, and have it delivered to your door. The process has basically become how people imagined it should be. Pick the item you want, upload your artwork, fiddle around with it until it’s just right, and order that sucker right up. And the fact that these places allow you to order even a single copy of your item, rather than mandating cartons full of them, opens up the market to just about anyone.

I was going to use CafePress to print some Vespers T-shirts for the crew helping out with the game, but someone recommended I give Zazzle a try instead. They’re pretty similar, but there are a few things I like a little better about Zazzle. So I went with them, and I had a few shirts printed up. Small “ORS” logo on the front breast, larger Vespers logo on the back with the blood stain. Simple design, easy to set up, bing, bang, boom. Vespers shirts for all. Yay Zazzle.

You know you want one. Just say the word.

Yeah, I feel a little goofy wearing this around, but hey, it’s my own freaking shirt, you know? (Funny story about the tag line. I think it was Jason, the game’s author, who felt we needed to have a tag line to go along with the blood stain logo, but none of us could come up with something that didn’t sound embarrassingly bad. He finally came up with “Say your prayers” which, I have to say, is both incredibly corny and perfectly brilliant. Get it? Say your prayers? See the double meaning? Awesome, right? No? Meh, never mind.)

By the way, if anyone out there feels the aching desire (without the accompanying embarrassment) to wear one of these around town, let me know and I can make it available on the Zazzle site. Ponder for a moment how much coolness awaits you.

Anyway, this isn’t about the shirt. It’s about the posters. Ah, the sweet, sweet posters.

One of the cool things I always liked about Jason’s Vespers is how many of the items in the church morph over time as the monastery sinks into evil darkness. One of the best: the frescoes painted on the church ceiling. They aren’t described in much detail in the game, starting out as follows:

>EXAMINE FRESCO
The soaring vaults are as vast and open as the arms of God. Frescoes depict the fall of Satan, with angels singing as they cut down the wicked.

That left us a lot of room to interpret, but you get the picture. As the game progresses, the image changes, reflecting the worsening struggle between good and evil, angels and demons. So for instance, at some point in the middle of the game (not really a spoiler):

>EXAMINE FRESCO
The Fallen are overrunning the angels, climbing through holes in the ground and spreading across the Earth. An angel's eyes meet yours and do not break. He is coming.

So this presented an opportunity and challenge for us in depicting the fresco and the changes that occur over time. Part of the problem is that we couldn’t realistically put the frescoes on the church ceiling, since it’s just too high up to see very well in the game. So we came up with an alternative, which was to have the frescoes painted on the walls of the church foyer. 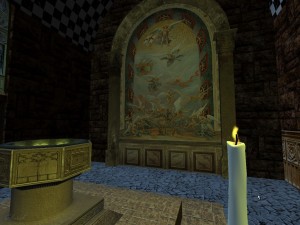 Anyway, the big challenge, of course, was to find someone who could actually, you know, make a fresco. I mean, that’s not easy. People don’t make frescoes very often these days. You don’t want someone just whipping together a little somethin-somethin and calling that a fresco. It has to be at least partially convincing. If I had the big AAA budget, we’d be looking for someone to research the artwork of the time in order to make a historically accurate rendering. Since it was just me working with the C- budget, I did most of the (hack) research on my own–using works by Giotto and Signorelli as a guide–and gave the information to a few prospective candidates from the most excellent ConceptArt.org, crossing my fingers.

The call was answered, quite impressively I would say, by Régis Moulun, a French artist. Here’s his gallery site, if you’re interested.

The art majors out there may look at these (eventually, when the time comes) and argue about the stylistic accuracy, but in my decidedly unartistic view, the frescoes he created simply kick ass.

Not to give too much away, but there are a half dozen of them. The one you can see in the image above is the first fresco, the one described as “angels singing as they cut down the wicked.” It’s beautiful, but it’s the tamest of the lot. They get progressively more disturbing, and I love it. Here’s a better view of the first fresco in full, with an additional shot of some of the close-up detail.

Weep at the beauty of the first fresco. (Click to enlarge) 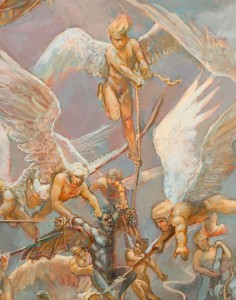 So like, these are really nice pieces, the kind I think would look great up on a wall. Slapping up a set of the original images might look a little odd, though, but that’s where the whole poster idea comes in. A little creative clipping, some small, well-placed logos, and a little Zazzle, and we have ourselves a pretty nice set of posters. To wit:

Your wall is begging you for this. And the other five.

We’re currently doing some renovations to our house, and when it’s finished we’ll have a new office with, I’m excited to say, a lot of empty wall space. I’ve got all six of these things printed up and ready for framing. I’m really looking forward to seeing them all framed, hanging side-by-side. Is that excessively geeky?

Now, I could show you the other five frescoes, but that wouldn’t be any fun, would it? Suffice it to say that I love the first fresco, and it’s probably my least favorite of the set. But if there are enough requests, sure, I can show them. And if people think this is something they might be interested in, it might make a nice gift, say, for those who pre-order (when that time comes). What do you think? Posters, anyone?