Well, it’s been a little bit since the last update, hasn’t it?

Work has been somewhat slow lately, owing to several things. A week of vacation was followed by a week of work-related travel, so not a lot of progress was made over that time. We did accomplish a few things; NR finished his work on the last two holy water rmodels (“dull” and “boiling”), and passed them on to me for implementation, so at this point all holy water versions are complete and functional. The “dull” version was a bit challenging because I wanted the water to appear cloudy, and that isn’t an easy thing to do in Torque. The solution that worked best was to create underwater smoke emitters, which was effective at making the water appear slightly opaque. The “boiling” version was a bit easier to finish since I already had underwater bubbles ready from the “hissing” version, so all I had to do was make the bubbles larger and spread them out a bit. The result is, I think, some very nice water to look at. Elsewhere in the game, not much additional progress was made, other than finalizing the implementation of the KISS verb, so that is now functional, although it took a little extra work than expected due to some errors with the ghost NPCs.

This past week was spent mostly making upgrades to my dev machine. My current setup is on a Mac Pro with a Boot Camp installation of Windows; most of the programming, testing, and asset management is done on the Mac side, while the modeling, animation, and exporting is done on the Windows side. Moving back and forth was getting to be a pain, since it required rebooting each time, so I decided to install Parallels on the Mac in order to run both OSes simultaneously. While that worked, Windows was just too sluggish running on a standard hard drive partition, so I upgraded to a new SSD drive, which meant recreating a new Boot Camp partition. This was not a big problem, until I ran into some issues reactivating some of my Windows software. After a couple of frustrating days working with several customer service folks, everything is now finally back up and running, but on a much speedier SSD drive. The new Parallels actually works quite well with this setup, and I think I’ll be very happy with it.

This week’s screenshot shows a preview of the “dull” holy water in the church font from Act 2. The fresco is visible behind it (although that’s the fresco from Act 1, not Act 2). 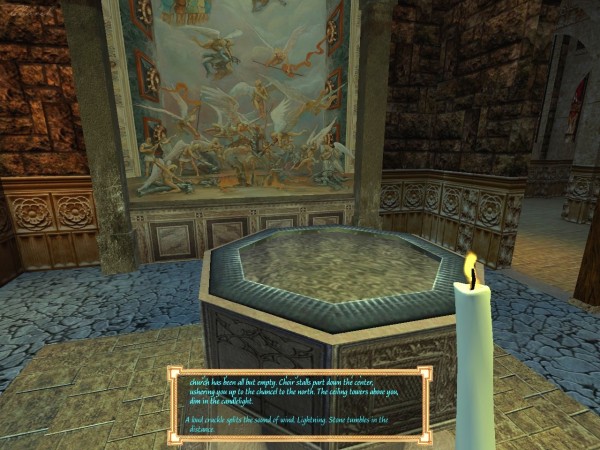 The holy water has turned dull and cloudy…a sign of things to come?