One of the interesting things about working on Vespers is that I’ve become so intimate with the original text and code that I probably know more about the game at this point than even the author, Jason Devlin. Often, I’ll come across an issue or question about the text game, and I’ll pop off an e-mail to Jason to see what he thinks we should do. The irony is that I’ve been so engrossed in every detail of the story for so long that I’m probably better able to address these things than Jason, who likely hasn’t even thought about the game in 3 or 4 years. (Mental note: really have to finish game soon.)

Throughout development, but particularly when Jason released the text game (and also when we started production), there have been many people drawing close comparisons between Vespers and Umberto Eco’s famous novel, The Name of the Rose, which I read back in the late 1980s. I can see that, at least on the surface; it was probably the first story I thought about after I initially played the game a few years back. But really, if you try to make a list of the similarities, I don’t think you get very far.

And that’s about all I got. Granted, those are fairly big ticket items, but they really don’t scratch the surface much. And I think it’s really just #1 that draws most people to make this comparison. But whereas The Name of the Rose is predominantly an intellectual, historical murder mystery that focuses on the scholastic method and the power of deductive reasoning, Vespers is more of a (for lack of a better description) suspense/thriller that explores the personal relationship between good and evil, and the roles of sin and virtue.

Contrast that with the graphical adventure game, The Abbey (also called Murder in the Abbey). I’ve played through about a quarter of this game (for research purposes, I swear), and it’s hard to imagine a game being more closely linked with The Name of the Rose than this one. The setting, the protagonists (including the young monk sidekick), the subject, the objective, all bear a far closer resemblance to Eco’s novel than Vespers does. I’m guessing that the story progressively deviates from Rose as the game advances. I don’t know if I’ll ever get through it, but if I do I’ll have to post some thoughts on it. 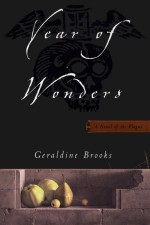 On the other hand, I just finished reading Year of Wonders, the international bestselling 2001 novel by Geraldine Brooks. Wonderful book, by the way, I recommend it. It’s a historical fiction novel about the small village of Eyam in Derbyshire, which quarantined itself in the 1600’s to protect against the spread of the Black Plague. Reading this novel probably would not remind people much of Vespers, but there are some definite similarities in the themes.

Granted, that’s still a pretty superficial analysis, and few people would likely see a very close resemblance between these two stories, but it still (to me at least) comes across as a much more supportable and convincing comparison than with Rose.

I suspect that the population of people who have played Vespers and read Year of Wonders is probably much smaller than those who have played Vespers and read Rose (or saw the Sean Connery movie, more likely), so we’re not likely to read a critique that delves into the themes of each. But I thought it was an interesting thing to point out after having read the Brooks novel, and never having been satisfied by the past comparisons with the Eco novel.

This entry was posted in story in games, Vespers. Bookmark the permalink. Post a comment or leave a trackback: Trackback URL.