Things have been relatively quiet here on the Brew lately, particularly with respect to Vespers. I don’t generally post very often, averaging about one blog per week, but even that is being stretched lately, and this is the first blog of the new year. Oftentimes silence reflects little to report from lack of progress, but in this case it’s actually a Pretty Good Thing.

Game development often goes in fits and spurts, especially if you’re a small (or solo) team. This has been especially true with Vespers, particularly on the animation front. N.R. has been steadily productive over time with all of the models and 2D art, which has helped us maintain at least some momentum over time. But, as I’ve blogged many times, it’s the animation work that has held us back for so long.

The two main reasons for this are (a) it takes time and effort to orient new animators to the project and bring them up to speed, and (b) for a variety of reasons, animators only seem to stay with the project for a short period of time, forcing me to find new ones and then go through the orientation process again and again. That’s been mighty frustrating. But with each new animator comes a renewed sense of hope and purpose, and so we end up with this seemingly endless cycle of disappointment and hope. 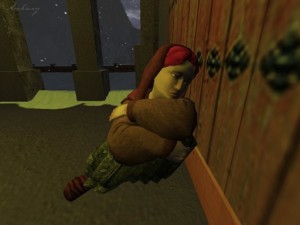 And so, as we start yet another year on this project, we enter the next cycle of optimism and anticipation. My latest call for character animators was met with a nice response, and I was able to work it out so that we actually have three animators currently working on different parts of the game. What’s especially nice is that two of them have good experience with the Torque system, so I’ve been able to skip that part of the orientation with them. While it’s exciting, it has also meant a good deal of work getting them all up to speed with the project, and getting them the necessary materials so they can start working on things. 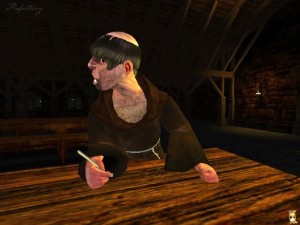 So I have some very experienced hands working right now on finishing up the animations for Act I, which means making some final adjustments to Drogo’s animations and getting things started on Cecilia’s. The work on Cecilia is a lot more complicated and challenging than the work on the other characters, for a number of reasons, so it will be nice to finally get that out of the way. And since there are three animators, we’re at last beginning to tackle some of the first animations for Act II which, even though we’re not yet finished with Act I, is an exciting and rewarding feeling. 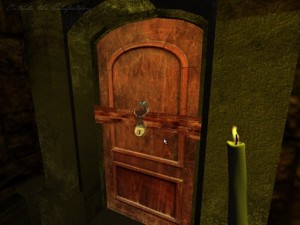 In the meantime, N.R. continues to plug away at the remaining content, working through the list of objects for Act II and beyond. One big milestone was reached this month as he finished up the last of the stained glass windows, which is huge. Because the four windows change six times over the course of the game, 24 different designs were required, eating up a big chunk of his development time. Now that that’s out of the way, he can concentrate on the numerous other church objects that change over time, as well as the objects in the cellar and the other objects from later in the game. One interesting challenge was how to design a lock for the calefactory door for Act II — given the design of the doors, with the ring handle in the center of the door, it wasn’t a simple matter to come up with a makeshift lock that Constantin could quickly put together and look like a convincing means of keeping the door from opening. I think the design he came up with should do the job well.

So if development goes in waves, I’m definitely riding the wave right now. Still lots left to do, but we’re creeping ever closer to the finish of Act I and the demo, which means we’ll be open for some testing soon. Very soon.