A long, long time ago—it looks like over five years ago, actually, which makes me wince—I posted a blog article here about an analysis of verb use in some well-known IF games. These were based not on actual player transcripts, but rather on the published walkthroughs of these games. The walkthroughs weren’t necessarily the quickest solutions to the games—they included commands that were technically unnecessary for solving the game, but which provided a more complete experience of the game for players who followed them. Still, they were by no means game transcripts, so they didn’t truly reflect the typical use of verbs that one might expect from players. The idea was to get a sense of the breadth and depth of verb usage in these games, and one of the things I found was a surprising range of verbs required, with one game requiring a total of 65 different actions. I also looked at Vespers, which required fewer verbs in its walkthrough than some of the other games, and was dominated by movement, talking, and examination.

But that, again, was an analysis of the verbs specified in the walkthoughs for those games, so it doesn’t represent an accurate verb frequency distribution for players who actually play the games. That would require a series of game transcripts, along with some effort to extract out and analyze the commands used.

As it so happens, our version of Vespers generates text files of game transcripts each time it is played which, when examined, have the same appearance as a transcript from an IF game. There are a few modifications; since movement is not represented textually but rather through mouse input, I insert notifications in the text files when the player moves from one location to another. I also insert notifications when the player clicks on an object, since this can help in the interpretation of the transcript. But overall, it looks much like a transcript from a text IF game. To wit:

When I went through a period of testing earlier this year in preparation for submission to the two game comps last month, I asked my testers to send me all of their game logs so I could look them over and find trouble spots, verb or noun synonyms that would be useful to implement, or newbie-like situations that would benefit from additional information or guidance. But this also gave me the opportunity to extract out all of the commands to look specifically at the verbs players were using, just to get a sense of what people were trying. For this report I didn’t use every game transcript, since it takes a good deal of processing with each file to identify and extract the commands, so what you see here is the analysis of seven transcripts of reasonable length and more extensive playing. But while the sample size is small, the results were nevertheless interesting: 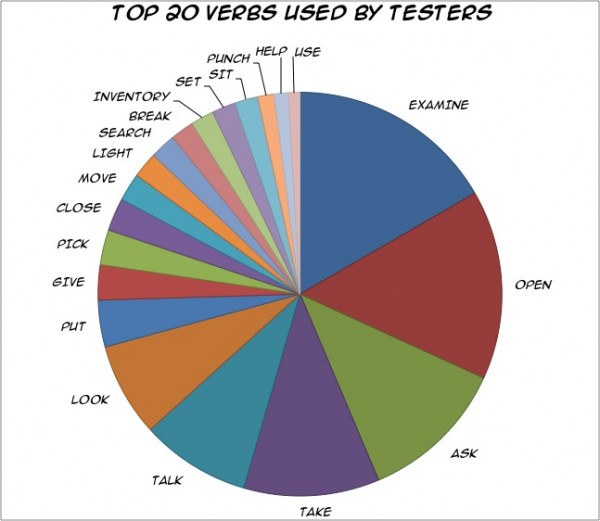 Click on the image to “examine” more closely. Get it? “Examine”?

This graphic shows the 20 most frequently used verbs in the game. Overall, in these transcripts, there were 82 different commands used, although some of those represent typos or attempts at abbreviations, such as typing T for TALK (which I haven’t implemented). Note, of course, that movement commands, typically near the top of the most commonly used verbs, are not represented here, since movement in our game is performed with the mouse. I’ve also removed any game meta-commands, such as commands that adjust preferences (like SET RIGHT MOUSE BUTTON and so forth).

This is potentially some really useful information, although it’s limited to the top 20 commands. What about the rarely used commands? That’s where some really interesting things can be found, as people try things either because of misunderstanding, confusion, or merely to test the limits of the system. What I found from a review of the commands tried only once, twice, or three times among all of the transcripts:

In all, the rarely used commands (those tried three times or less across all transcripts) accounted for 52 different types of commands, and most of those gave no particularly informative response. That’s something to look more closely at, although to be honest, I don’t have the full set of verbs implemented at this point.

One thing to bear in mind is that these were transcripts from testers, not random players, so these could certainly be people who were trying to push the limits of the game rather than simply playing through. They may also have restricted themselves from doing the types of things they might ordinarily do when someone isn’t “watching,” per se, through submitted transcripts. But all in all, I thought it was very helpful to see the kinds of things people were trying. Not only does it help identify gaps in my verb implementations, but it also helps to debug, locate areas or objects that give people trouble, and improve the responsiveness of the game for less experienced players. Overall, it’s a really great tool for testing.

This entry was posted in 3D/if, game design, interactive fiction, text in games, Vespers. Bookmark the permalink. Post a comment or leave a trackback: Trackback URL.