In the last post, I talked a bit about my game design documents for Vespers, although technically they’re really more like level design documents. Vespers doesn’t have levels, of course, but it does have Acts that are organized chronologically, so design docs for each Act help to organize the content and action into discrete compartments. I thought this would be an interesting look at how the game is structured, where the action takes place, and how the docs have helped in the design and development of the game.

Previously, I showed the design docs for Acts I and II, which represent the first day of the game. Most of the action involves talking with the various NPCs to understand the backstory and current context, and to set the stage for the rest of the game, although there is also a little bit of puzzle solving. If the player makes it past the first day, then the game proceeds to Acts III and IV, which represent the second day of the game. That’s when most of the heavy action takes place—truths are learned, plots are uncovered, lives are endangered, and several puzzles need to be solved along the way.

Plenty of spoilers ahead. You are hereby warned.

The design doc for Act II got a little complicated, because some of the action is ordered chronologically, and some characters appear in different places at different times during the Act. It starts with the player waking in his bedroom and confronting Constantin, and from there it’s a bit of a free-for-all. One thing I have to review more carefully in the original code is if any of the events that take place are required before others can occur. For instance, I know that the player can’t encounter Drogo in the Cloister until after he converses with Constantin outside the Calefactory, but can all of the activity beyond the front entrance—which is now accessible in Act III—occur without first confronting Constantin? What about encountering Drogo in the briars behind the stables? There is a good deal of openness in the game world, but not always, as I’ve learned. 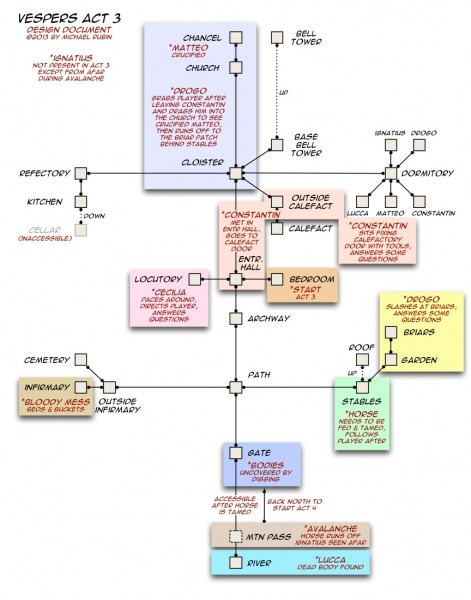 Although I have most of the content for Act III already in hand, there are some aspects here that I’ve always known would be a challenge, and those are still yet to be resolved. There are three scenes in particular that will be extremely difficult to organize and implement: Drogo dragging the player into the Church, animating and riding the horse, and, worst of all, the avalanche scene in the mountain pass. I don’t know what kind of creative magic it will take to develop and animate an avalanche.

Act III ends if the player can survive the avalanche and make it back to the main gate, which triggers the start of Act IV, which is the real climax of the game. By now, you certainly know about the spoilers coming.

Like Act III, Act IV has a number of scenes that don’t necessarily have to occur in a particular order, or in some cases don’t have to be encountered at all, and many of them are technically challenging. For instance, the scene at and behind the stables when the player encounters the hungry wolves is one that could be bypassed altogether (I think), while at the same time it will involve a lot of complicated animation and coordination. Then there is the cellar scene, which is not optional, but also quite complex to orchestrate. The fire in the monastery and the final struggle at the top of the bell tower won’t exactly be walks in the park, either. But hey, that’s why they pay us the big bucks.

Act IV ends after the encounter at the top of the bell tower, transitioning immediately to the third day, or Act V. Little action happens in Act V, as it takes place entirely in the Church, but it dictates the final outcome of the game, based primarily on the choices and actions that led to this point. It is essentially a denouement for the game. 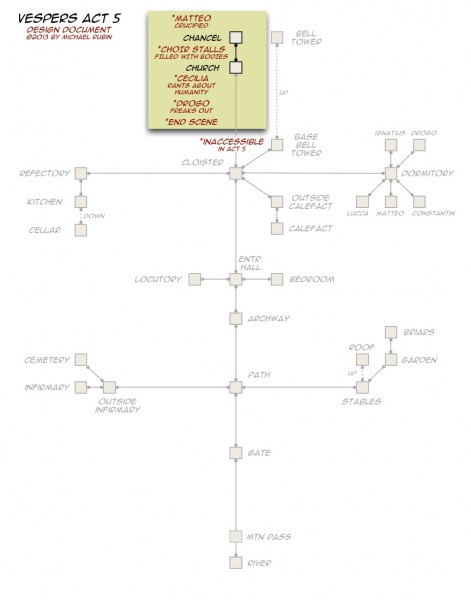 So those are the design documents for the different Acts of the game. As you can see, even after finishing Act I and the first cutscene as the demo (submitted to the two different comps last month), there is still a great deal of work left to do on this game. Again, most of the content for this work is already done, such as the modeling, voice work, and so on, but what still remains is the more complicated stuff: the animation and the orchestration of the different scenes. We’ll just keep pecking away at it until it’s done.

This entry was posted in game design, Vespers. Bookmark the permalink. Post a comment or leave a trackback: Trackback URL.